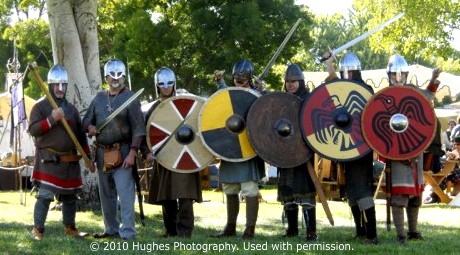 The Vikings of Bjornstad have been involved in a wide range of fascinating - and fun - projects.

We've set up our Viking Age encampment at:

And ... at most of our events we perform "The Viking Art of War", a 15 to 20 minute demonstration of Viking age weapons and tactics.


Jack Garrett and The Vikings of Bjornstad maintain this website for your personal interest in Viking re-enactment, education and research. We do not warrant or represent that the content is completely current, accurate, error proof, nor all of the linked websites to be truthful and reliable at all times. The contents of this website, unless otherwise stated, are exclusively the property of Jack Garrett and are protected under United States and International Copyright laws. The content and images within this website may not be reproduced, copied, transmitted or manipulated without the written permission of Jack Garrett or the photographers who have granted permission for their photographs to be displayed herein. Use of any image as the basis for another photographic concept or illustration (digital, artist rendering or the like) is a violation of United States and International Copyright laws. All images and written materials are copyrighted © by their respective copyright holders unless otherwise stated. We make no claim to your happiness, contentment or future well being upon reading the information contained within this website, including this paragraph.